How Christianity Today can turn debacle into something good

Posted on March 2, 2016 by bwebaptistwomenforequality

“We are horrified,” Mark Gallia, editor-in-chief of Christianity Today wrote to me in response to my email, “I am sorry this happened.” I accept his apology and know that he is horrified at the ad that appeared in the March CT section Marketplace, under Employment Opportunities. 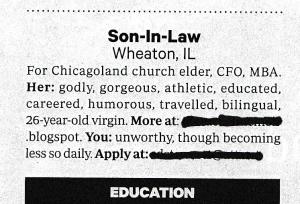 She is a real person and had no idea her father had placed this in “the magazine that Billy Graham founded” which were her words in her explanation on her blog. He not only placed the ad (or somebody did) but he gave her blog address. I have blacked out her blog address and the Apply at email address.

This ad did not fall from the sky into that space. It is just one page and Son-In-Law was the first thing I saw as I flipped through the magazine. The Marketplace editor should have seen it, too. Perhaps someone saw this as a joke and the person, or persons, responsible did not see anything wrong with it. I do not believe this failure is applicable to all those at CT, but it is applicable to someone there.

It is no joke when a daughter – in this case a 26 year old woman – is offered for sale by a father. For one thing, he is selling something he doesn’t own. Many apologies are owed. The father, the sales person who took the ad, and the editors owe this young woman an apology. They also owe every woman an apology. According to Mark Galli, they have taken steps at Christianity Today to ensure this does not happen again.

I accepted Mark Gallia’s apology to me and I wrote back,

“Mark, there is a way to come out of this debacle with grace and dignity. You can turn this patriarchal employment advertisement into something good.

In contrast, you can feature in Christianity Today (CT) those women who are working for Christian egalitarianism in the church and home. Our story has not been told. There are many of us who are fighting this battle against male headship. I, myself, stood up in a movie theater in December 2015 at a showing of Suffragettes, and said to those sitting there “Women are still not equal in most churches on Sunday mornings.” Hear our voices.

I hope their inbox is full and their phones are ringing off the wall from pastors, women, and all others who saw this or heard about it. But I doubt that. I expect there were more than a few snickers by those who should know better.

This site uses Akismet to reduce spam. Learn how your comment data is processed.